Now consider that for some reason we want to include a type assertion, rather than just foo we want foo as Foo.

Surprisingly, this one doesn't compile, the error points to the last line and says

As always, your goal is to explain the unexpected behavior here.

We all like good examples, examples which, when seen, make us grasp new ideas easier. I believe the notion of Conditional Types in TypeScript is often demonstrated in a way that makes you wonder what's the real purpose of it. Let's just have yet another example that could be useful here.

Let's start with a function type, it could be a type of a custom function or a built in function.

The two function types have a different number of parameters but with the TypeScript's type system, we can write an auxiliary type that just picks a type of specific parameter.

This is where the actual example begins. The initial part of the example is based on a code presented in Programming TypeScript by B. Cherny. Let's start with a type that picks a parameter that comes, like, second on the list of parameters.

This works great and to me - it's enough to demonstrate how useful the ? : conditional operator is. Using this technique we can pick a type of a specific argument of specific function type, which, as far as I know, is not possible in languages like, say, C# or Java. In C#, if there's a function and the second argument of the function is, say, int and you have to declare a variable of this type, you have to know this type in advance to even start writing code.

But, this example can easily be pushed forward, why just pick a specific, second parameter? Why not write a generic type that picks the argument we want, first, second, third? Let's go beyond the original example from the book.

The question is, can numbers (parameter indexes) can be arguments of generic types?

The only small technical issue is that our new generic type needs two generic arguments and we need constraints on both of them which the ? : operator doesn't support directly (or I don't know how to do it :).

The first approach involves nesting the ? : operator so that the nested part introduces the constraint on the second argument.

Please take a while to compare this new type to the previous one. As you can see, the parameter list is expressed in a more concise way, we don't need to introduce specific parameters, instead we hide them all under the spread (...) operator. But the other generic parameter, N is constrained to be a number (the N extends a number part) so that it can be used to just index the signature type (the C[N]) part.

If nesting the conditional type operator bothers you as much as it bothers me, there's another version

Both operators work, please take your time to play around

And just by the way, did you know that TypeScript's type system is Turing Complete (please also take a look here and here and here)? This basically means that we could write actual programs using types only and results would be computed by the compiler during compilation. Please check the linked article to find few possible ways this could be used (and no, it's not quite useful, you wouldn't like to write code that runs on your type system).

Email ThisBlogThis!Share to TwitterShare to FacebookShare to Pinterest
Etykiety: TypeScript

This is a short follow up to one of my previous posts, the Node.js + Express + TypeScript where a tiny tutorial on writing node.js node with TypeScript was discussed.
This time I'd like to introduce the ts-node which basically wraps the TypeScript execution in a single pipeline so that there's no need to precompile the TypeScript to JavaScript.
One of ways to use the ts-node is to install it globally and run the TypeScript code with Note only that the tsconfig.json has to be present, just to configure TypeScript options.
However, to also be able to debug the TypeScript from the Visual Studio Code and still use the ts-node to execute the code, install the ts-node locally and create a .vscode/launch.json section
A tiny code to test this
Autor: Wiktor Zychla o 2:29 PM No comments:

Email ThisBlogThis!Share to TwitterShare to FacebookShare to Pinterest
Etykiety: TypeScript

After VS 2022 has been updated, suddenly some projects refuse to provide navigation between tokens, you can't just click on anything and "Go to Definition..."
There are couple of suggested workarounds, including restarting VS, deleting *.user files or going to Options/Debugging/Symbols and invoking Empty symbol cache
A working solution has been found here and it consists in updating the Microsoft.Net.Compilers package referenced in affected projects to a newer version.
This however, potentially causes another issue, this time on a build server, if you happen to rely on msbuild. This time, the MSB4184 is thrown
Turns out, this also has been observed. The proposed solution is to uninstall the Microsoft.Net.Compilers, this breaks token resolution is VS, though.
What seems to work for us is to have
Autor: Wiktor Zychla o 12:28 PM No comments:

What happens when you just open the Visual Studio? It displays a solution selector where you pick up one of latests solutions. This is the default behavior. This can be changed, if you go to Options and then go to Environment/Startup page, you can change this to just show an empty environment.

People got used to it, also, it's mentioned in the documentation

The only problem is that the Environment/Startup is not there in Visual Studio 2022.

Instead, it's been moved to Environment/General, unfortunately, it's at the very bottom of the page and can easily be missed because you need to actually scroll down the page to see it 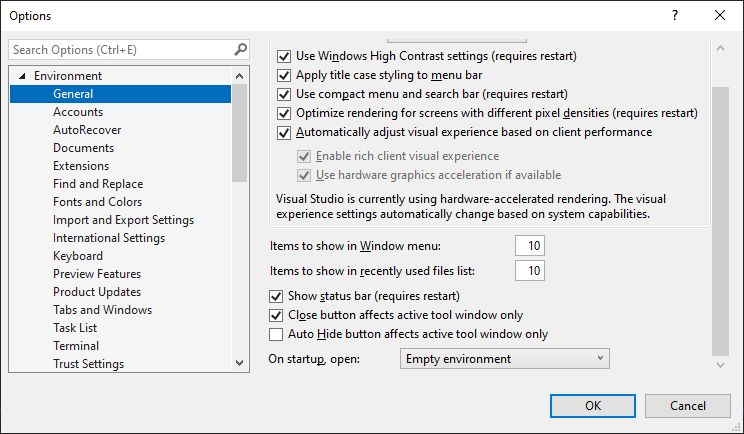 The Node.js + Express + Javascript is a great platform and this short tutorial shows how to add TypeScript to the picture.

so that whenever you invoke tsc from the command line, the compiler follows your tsconfig.json and does its job. Then add the tsconfig.json Note that we specifically ask the module subsystem to translate TypeScript's export/imports into node.js commonjs modules. We also turn on the esModuleInterop flag for better node.js compatibility.

Now install some typings for node and express (other typings should possibly also be installed, depending on what packages you are going to use.

Create the app.ts file, which will be the starting point of the app and add .vscode/launch.json with

Note how express is imported and how a library module (http) is imported - in both cases, there's the full intellisense support in VS Code as well as the support from the Typescript compiler.

To compile the code just invoke

once. To run the compiler in the watch mode:

To show how TS modules work, create a simple module, m.ts with

and import it in the app.ts Note how m.ts is compiled to m.js and also note how m.js is imported in the app.js (compiled from app.ts).
Autor: Wiktor Zychla o 7:28 PM No comments:

Years ago I've blogged on how to do the WS-Fed using code only in .NET. The approach had multiple advantages over the static WSFederationAuthenticationModule (the WSFam) configured in web.config. The most important feature here is that you have the most control over what happens: how the redirect to the Identity Provider is created and how the SAML token response is consumed.
This is extremely useful in complex scenarios, e.g. in multitenant apps where tenants are configured individually or multiple identity providers are allowed or even when the federated authentication is optional at all.
.NET 6 (.NET Core) has its own way of handling WS-Federation, namely, it registers its own middleware (AddWsFederation) that can be controlled with few configuration options. However, I still feel I miss some features, like triggering the flow conditionally in a multitenant app. What I need is not yet another middleware but rather, a slightly more low-level approach following the basic principle: not use module/middleware but rather have a custom code in the logon controller/action:
Please refer to the blog entry I've linked at the top to see the approach presented there follows this.
Can we have a similar flow in .NET Core? Ignore the middleware but rather have a total control over the WS-Fed?
The answer is: sure. Since the docs are sparse and there are not-that-much examples, a decompiler is handy to just see how things are done internally so we don't rewrite anything that's already there.
So, just setup your cookie authentication and point your unauthenticated users to /Account/Logon. And then:
Note how the IssuerSigningKeyValidator delegate replaces the IssuerNameRegistry from the .NET Framework example (linked blog entry). Also note, that other configuration options of the TokenValidationParameters can be changed freely here on a per-request basis.
Autor: Wiktor Zychla o 5:38 PM No comments:

Wiktor Zychla
I am a software architect and an academic lecturer. I've been awarded Microsoft MVP in C# Architecture between 2005 and 2010. Got a PhD in computer science in 2008. Currently I work mostly with C# and Javascript and love both languages. I consider myself a design/architecture patterns evangelist. In 2003 I wrote first Polish book on C#/Windows programming, "Windows oczami programisty" (Windows through the eyes of a programmer) (the book is out of print)